History of the Museum

At the same time a place of memory for prehistory, a museum for objects, a centre for studies and a place for the distribution of constantly-evolving knowledge, the National Prehistory Museum has been a place of reference for Prehistorians as well as for visitors since its creating at the beginning of the 20th century. Located in close proximity to the main sanctuaries of cave art registered as a UNESCO World Heritage Site (Font-de-Gaume caves, Combarelles…), the museum houses exceptional collections that retrace more than 400 millennia of human presence.

Starting in 1913, Denis Peyrony, a tireless researcher whom we have to thank for the discovery of numerous sites, had the State purchase the ruins of the Château des Eyzies in order to conserve, study and display on site the archaeological heritage of the Valley of the Vézère. This region has many major points of interest, amongst them the permanent occupation throughout Prehistory as an ideal refuge zone for human and animals during glacial periods of the Quaternary period, remarkable conservation conditions and a high quality of scientific research. Moreover, this is where Humanity brought out its capacity for symbolic expression, shown as much by the Neanderthals’ first funerary acts (-80,000) as by Homo sapiens (modern man) with the apparition of monumental art in various forms (-35,000).

Inaugurated on July 19, 2004, the expansion designed by Parisian architect Jean-Pierre Buffi considerably increased the accommodation capacity of the establishment and today offers the best visiting conditions to the public. More than 18,000 pieces are on display on a surface area of nearly 1,500 square meters in an entirely new museum design. 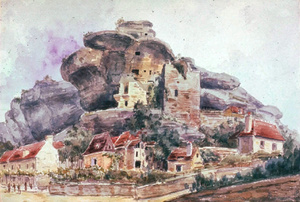 History of the “Château”

It is necessary to record the permanent inhabitation of the cliff of Les Eyzies. The privileged placement of its upper terrace dominating a vast hunting territory and an inevitable thoroughfare for hordes of reindeer was without a doubt one of the main reasons explaining the Magdalenians’ choice 12,000 years ago. Traces of their settlement still survive today, wedged between the two bodies of the castle building, where they were discovered and excavated at the beginning of the 20th century. But between these two extremes, and after a medieval gap that is not well understood and to which we probably owe the numerous scars left in the rock (holes for posts and beams, larmiers and troglodytic dwellings called cluzeaux), the history of the Château des Eyzies deserves to be lingered over.

A quarter century after its construction, the castle was nearly razed by a decision of the Privy Counsel of March 1606, but the intervention of Turenne suspended the threat. After Jean-Guy’s death around 1615, his heirs only brought slight modifications to the building, especially as war did not spare this family that lost three sons on the battlefields of Louis XIV. In 1748, the castle and the grounds fell to Elisabeth de la Boire de Campagne by marriage; she resided there until her death. Géraud, her grandson, expressed the desire to undertake the renovation of the structure, but the Revolution put an end to it by forcing him to emigrate. In an ironically tragic twist, François Lassudrie purchased the building in the year 1100… to make it into a stone quarry!

Thus began the dismemberment pursued by the heirs, which lasted until 1846, the date the Esclafer family saved the life of the castle by buying it. It was about time! Of this desolated ruin, only a few partially destroyed walls, a few mullioned windows, a bartizan; inside, two vaulted rooms and two monumental fireplaces had escaped the disaster. In 1913, Denis Peyrony acquired the ruins of the Château des Eyzies in the name of the State in order to install an archaeological search repository coupled with a true museum: another chapter was about to begin…

Following on from a history several tens of thousands years old

The expansion of the National Prehistory Museum erected its contemporary architecture on an exceptional site: grasping onto a monumental cliff, the museum opens up on a semicircle of hills and overlooks the Valley of the Vézère, the true European “Valley of Man”, named a World Heritage Site for the richness of its Palaeolithic remains. Here, human history has left an unparalleled memory, one that is tens of thousands of years old.

An architecture symbolising the line of human history

If the new museum announces the presence of 21st-century man, his modernity is registered in an environment marked both by the grandeur of the cliff and by the small size of the historic village of Les Eyzies de Tayac, with its 900 inhabitants and its medieval vestiges. Just the opposite of the castle tower, where the first Prehistory museum opened in the early 20th century, the current museum is read horizontally: it symbolically draws out the line of human history and by its uniqueness signals the presence of the landscape and the volumetric purity of its architecture, the public dimension of the building. It also respects the multiple pre-existing volumetric scales: the buildings on the valley that house the current work and welcome spaces, the auditorium and the temporary exhibitions that fall within the fragmented scale of the village; the upper part, on the other hand, where the museum rooms are situated, affirm the museum’s presence against the cliff.

An architectural ensemble with the colours of the cliff

The architecture integrates the constraints of the plot’s small size, the terrain’s incredible difference of height, as well as the particular nature of the soil, all while offering the visitors a completely fluid museum visit. The materials used also draw from the environmental particularities: the solid Dordogne stone, used for the vertical walls and the majority of the horizontal surfaces, plays with the light and associates its golden flesh with the white concrete of the museum rooms and with the walls carved in open stone of the lobby and the stratigraphic staircase. The tons of ochre, just like the grey of the cast aluminium roofing, reflect the timeless colours of the cliff. The materials that were mainly of natural origin will be worn down by the passage of time, like the majestic constructions of Périgord and the rock of the escarpment.

From the contemporary world to the prehistoric era

Starting from the entrance place that is flooded with light, visitors enter the subdued ambiance of the lobby, they continue through a dimly lit narrow gallery to reach the “stratigraphic funnel” a spiral staircase that detaches visitors physically and symbolically from the contemporary world to better immerse them in the Prehistoric era.

The permanent exhibition rooms stretch down the rocky wall, without minimising it, transforming it into a true backdrop and reflecting the daylight. The glass walls open onto the rocky wall and create a luminous ambiance whereas the vertical slits opposite the wall filter the intense southern light and frame the punctual views of the valley, inviting the public to turn toward the cliff, an integral part of this visit through time.

Timeline of the Museum

Edouard Lartet and Henry Christy began the excavation of the cave called “Les Eyzies” or “cave Richard”. They discovered several sites in the commune of Les Eyzies (Laugerie-Haute, the valley of Gorge d’Enfer) and the Valley of the Vézère (eponymous archaeological sites of the Madeleine and the Moustier).

Excavation of the Cro-Magnon Shelter: the first amateurs arrive at the site.

Discovery of cave paintings in the Caves of the Mouthe…

…and in the Caves of Combarelles and Font-de-Gaume. Abbé Breuil, Doctor Capitan, schoolteacher Denis Peyrony excavated the sector. This year is marked by the recognition of Palaeolithic cave paintings.

Setting up the Collections and Creation of the Museum

Denis Peyrony (1869-1954), placed in charge of the mission by the Minister of Fine Arts. The collections of tools and prehistoric art objects are brought together by Capitan and Denis Peyrony. After various pillaging and purchases by foreign hobbyists, the decision was made to create a Prehistory Museum of Les Eyzies.

The major works of art, including the most beautiful pieces of portable art of the Denis Peyrony collection were left at the National Museum of Antiquity of Saint-Germain-en-Laye (Bison se léchant from the Madeleine site).

Denis Peyrony had the State (the Minister of Fine Arts) purchase the ruins of the Château des Eyzies to install an archaeological search repository and a prehistory museum called “The National Prehistory Museum”. The Peyrony collection, including a large part of the stone and bone tools of the Madeleine site as well as casts of the portable art, arrived at the museum.

Denis Peyrony set up a collection of photographs of the excavations and the museum collections (400 negatives).

Opening to the Public

A dozen sites were opened for public visits: decorated and fitted out sites or caves that Denis Peyrony had the State purchase several years ago, like Font-de-Gaume, Combarelles (1901), Moustier (1910), Micoque (1914), then Laugerie-Haute (1921): the tourist office of the Les Eyzies was created by Denis Peyrony to assure the touristic promotion of the region. The museum collections grew, largely thanks to Denis Peyrony’s own excavations.

Denis Peyrony launched the “Practical Institute of Prehistory” or “House of Prehistory” project on the site whose concentration of prehistoric sites from all eras made it particularly suitable for a training site. This project was not pursued.

Inauguration of the statue of Primitive Man by Paul Dardé on the castle’s terrace.

Elie Peyrony, son of Denis, became curator of the museum.

New Discoveries and Organisation of the Archaeology

Discovery of the Lascaux cave.

Discovery of the Rouffignac cave

The Lascaux cave was closed.

Creation of the office of excavation and relics (origin of the archaeology subdivision).

Jean Guichard was named curator of the museum.

The National Prehistory Museum was the second of the province’s museum to be purchased by the Direction des Musées de France.

Expansion of the museum

Salvage excavation on the site of the future museum expansion.

The François Bordes collection, previously stocked in Bordeaux, arrived at the museum.

Les Eyzies International Symposium dedicated to the museology of the archaeology museum.

30,000 square meters of rock were extracted from the cliff

The construction work of the new buildings was completed.

December: Visitors gained access to the collections presented in the former castle by taking the exterior staircase of the new building.

March: The first display cases and technical equipment were put in place.

July 19: Inauguration of the new museum.