Prehistoric Sites of the Valley of the Vézère 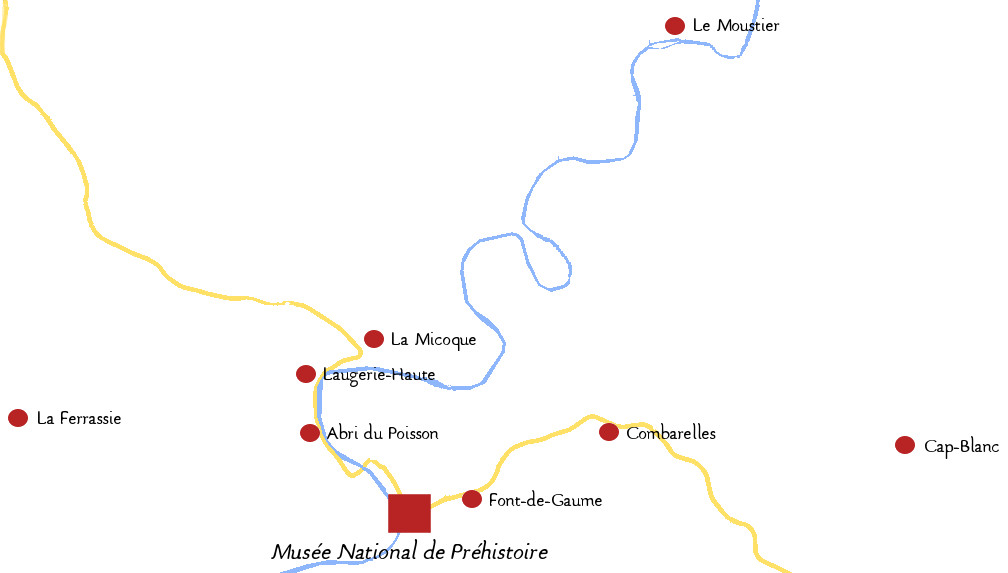 Prehistoric Sites of the Valley of the Vézère

The decorated caves and the prehistoric sites of the Dordogne are exceptional sites making up a more than 400,000-year-old testimony of the human occupation of Périgord.

Amongst the Valley of the Vézère’s sites, the site of La Micoque is where the most ancient traces of human occupation in the region were found.

The Moustier series, eponym of the culture of Neanderthal Man, covers a period stretching from 55,000 to 42,000 years B.C.

The excavations of the site of La Ferrassie (around 40,000-25,000 B.C.) yielded Neanderthal tombs as well as a beautiful example of engraved blocks that constitute the first signs of prehistoric art.

The archeological site of Laugerie-Haute(24,000 – 14,000 BC) is one of the largest classical sites of the Upper Palaeolithic. It delivered bone tools, art objects and an abundant series of carved flint.

The decorated caves and shelters are among the most beautiful cavities of the Valley of the Vézère.

Located in the Valley of the Gorge d’Enfer, the Shelter of the Fish contains one of the first examples of prehistoric relief sculpture (around 25,000 B.C.): a life-sized salmon.

The Cap Blanc Shelter displays one of the most beautiful Magdalenian prehistoric sculpted friezes.

Famous for its polychrome paintings, the Font-de-Gaume Cave contains more than 200 animal figures and numerous signs (around 14,000 B.C.)

Located nearby, the Combarelles Cave, with more than 800 instances of cave art, the majority being engravings, is considered to be the other major sanctuary of Magdalenian (around 13,000 B.C.).

To learn more about these sites

The decorated caves and the prehistoric sites of Dordogne are exceptional sites making up the more than 300,000-year-old testimony of the human occupation of Périgord.

Classified as an historical monument, the Font-de-Gaume cave is the last cavity with polychrome paintings in Aquitaine still open to the public. In 1901 Capitan, Breuil and Peyrony discovered these cave paintings of great aesthetic quality, which was a decisive argument for the recognition of cave art after the controversies surrounding Chabot, Altamira, Pairnon-Pair and La Mouthe. More than 200 instances of painted and engraved cave art, organised in a composition and even in scenes occupy the four main parts of the 120-meter long network. The themes, as much animal-based (dominated by bison) as nonrepresentational (quadrangular signs, tectiform designs, etc.) reinforce the interest of these artistic testimonies attributed to the Magdalenian that is part of the first great masterpieces of humanity.

With more than 600 instances of cave art, most of them engraved, the Combarelles Cave, discovered in 1901 and certified by L. Capitan, H. Breuil and D. Peyrony, is rightly considered as a major sanctuary of Magdalenian culture. Beyond the porch excavated by E. Rivière as early as 1892 two diverging galleries sink back into the rock. The largest of the two, which is open to visitors, is a narrow zigzagging hallway of more than 240 meters in length. The animals, finely engraved and more rarely drawn in black, evoke a diversified fauna including horses, reindeer, ibex, mammoths, rhinoceros, bears, large cats and a few bovine; reading these tangled animal engravings is made easier by an often realist treatment that clearly distinguishes them from an exceptional ensemble of about 50 much more schematic anthropomorphic figures and from a few signs, notably tectiform signs. It is all attributed to the recent Magdalenian, around 13,000 B.C.

The Cap Blanc Shelter presents one of the most beautiful friezes of Magdalenian prehistoric sculpture.

In 1908 Raymond Peyrille reported the discovery of the Cap Blanc shelter to G. Lalanne (a doctor from Bordeaux sponsoring the research). While working on the Lausel site, R. Peyrille noticed the presence of a cavity at the bottom of a cliff. Work clearing the cavity began in September 1909. The workers uncovered two different archaeological layers. A 15-meter long shelter slowly appeared as the levelling work went on, delivering sculptures and bits of paintings. A human skeleton was also exhumed at the base of the shelter wall.

Shelter of the Fish(Les Eyzies-de-Tayac, Dordogne)

The Shelter of the Fish is located in the Gorge d’Enfer valley enclosed by the Tayac and Grand Roc limestone mountains that overlook the right bank of the Vézère river. Discovered by Giraux in 1892, the shelter became famous twenty years later “when, engraved and sculpted in relief on the ceiling of the vault, a superb life-size fish was noticed. It is a “becquart” salmon, its jaw pulled back, characteristic of a male exhausted from spawning. The Gravettian dating (around 25,000 B.C.) of such a rare subject would make it one of the first representations of a fish ever known. This salmon was part of a more complex general composition. Notably we can see below the fist a hatched rectangle seven lines deep… In front there was perhaps the front half of a horse and various more enigmatic engravings. Additionally, a negative handprint, painted in black, was discovered in 1975. Perhaps the ceiling was entirely painted in black and red, of which only a few traces remain in the cracks of the rock.

Located on the right bank of the Vézères river two kilometres from Les Eyzies, this shelter is one of the most immense of the region, measuring around 200 meters in length. This crucial site excavated in particular by Lartet, Hauser, Peyrony, and Bordes welcomed several millennia of human occupation from the later Perigordian to the middle Magdalenian (24,000 – 14,000 B.P.), which was put to an end by the collapse of several enormous blocks, creating the current natural boundary. The archaeological layers reveal an abundance of stone tools, beautiful quality bone tools as well as portable art objects or engraved blocks mainly on the upper layer.

Discovered in 1895, eponym of the “Micoquien” and the “Tayacien” this site is crucial for understanding the early Palaeolithic period. It was quickly the target of numerous excavations; the last ones on date having been completed in 1995. Located at the bottom of the cliff, this encampment has a large stratigraphy of about 10 meters that cover 300,000 years of human occupation, including the first traces of man in the region.

In close proximity to a small cave and a modest shelter, the great La Ferrassie shelter was exploited at the turn of the century and excavated in a more modern way between 1968 and 1973. Its imposing stratigraphy (40,000 / 25,000 B.P.) shows the succession of the last Mousterians superseded by the first modern men (to the Aurignacian period) followed by the Perigordians. Beyond this cultural transition, La Ferrassie is famous for its eight Neanderthal tombs (children, adults, elderly people) and for a beautiful example of blocks engraved with schematic marks discovered in the Aurignacian layers and constituting the first well-dated signs of prehistoric art.

Discovered in 1863, in 1869 this major site became the eponym of “Mousterian” culture, corresponding to Neanderthal man. The lower shelter, exploited as early as 1907 revealed the presence of a Neanderthal human skeleton the following year. The stratigraphy is composed of several industrial features: Typical Mousterian then Mousterian of Acheulean Tradition and Denticulate Mousterian as well as lower Perigordian and Aurignacian in the upper layers.

For more information, visit the website of the Centre des Monuments nationaux.